While I'm sure you're all sick of Seoul-related posts, after nearly 7 weeks away, It was time for me to head back to the capital. What can I say, dance, friends and family exert a strong pull  ^_~.  Alongside my usual activities, I also had the opportunity to check out a fantastic new hostel.

Seoul Base Camp Hostel is located about 10 steps south of Exit 8 of Hapjeong Subway Station (합정역). Placing it at short 15minute walk from the heart of the vibrant Hongdae area.  Run by Min and Jake, this hostel has a great vibe and hosts who speak English. The space was formerly an old time-y dance hall (apparently they occasionally still get some of the older clientele dropping by looking for some swing dancing!) and I love what they've done with it. Rather than put up walls, they've used canvas to give the place a vast tent-like feel. Their wooden-cubby beds act like noise and light dampeners to ensure that you get a peaceful night's sleep. They also have normal bunks for those wishing for a wider, less enclosed sleeping space. More important to many visitors to Seoul, the Base Camp also offers a roof top terrace and (soon to be implemented) roof top bar offering one free beer per night to all guests, in addition to a (soon to be finished) hot tub. Follow up a great night with Min's delicious (and free) waffles in the morning for breakfast and you've got the perfect hostel! Check out the pictures below and be sure to look them up on Facebook, Google or their shiny new website at SeoulBaseCampHostel.com if you are interested in staying. The price is pretty low at present as they do not yet have the above mentioned features up and running, but that makes it even more worth the visit! 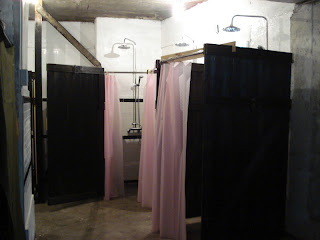 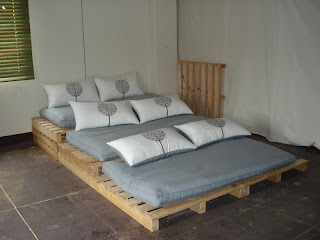 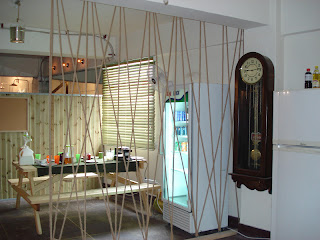 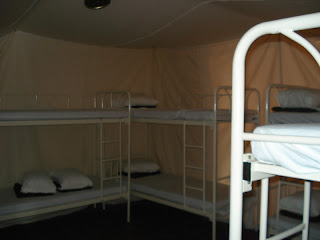 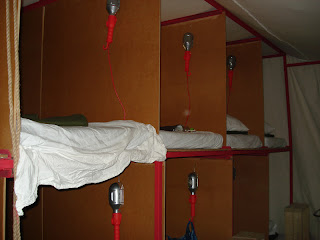 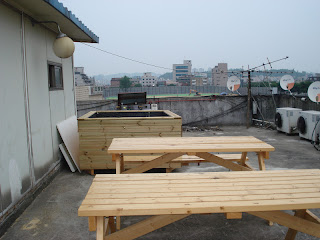 While the Base Camp experience was well worth the trip to Seoul in itself, what would a trip be without a little more exploration!


Although I've spent much of my Seoul-time in the Hongdae area, walking around with MinJung on this past trip, I spotted something I'd failed to notice before. The "Luxury" Norebang (singing room) chain has huge windows through which you can watch patrons as they belt their hearts out! I never would've noticed had it not been for the crowd of local Koreans snapping pictures. Couldn't get close enough to snap a clear shot, but check out this guy's moves below! 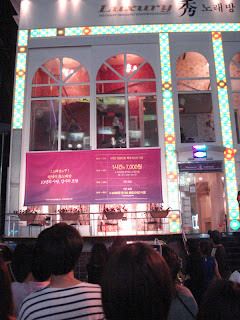 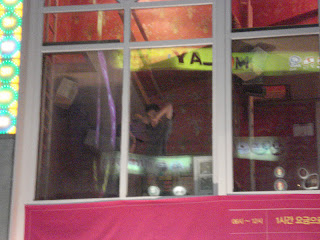 In addition to spending more time in Hongdae, I got to check out Dongdaemoon (동대문), or the "Great Eastern Gate" -  also called Heungjinmoon (흥진문), or "The Gate of Rising Benevolence".

The gate was initially built in by King Taejo of the Joseon (pronounced Chosun) Dynasty in 1398, was renovated in 1453, and then finally rebuilt in 1869 (presumably after it's destruction by the Japanese) and served as the Eastern passage through the city walls during the Joseon Period. 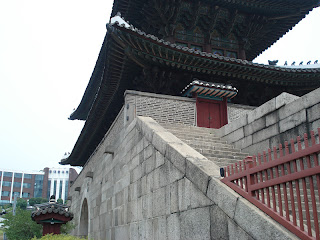 We also decided to explore the area to the west of Gyeongbuk Palace and to the East of Hongdae a bit more thoroughly as neither my friends nor I had ever been. 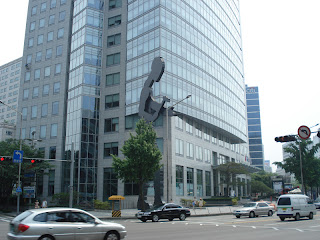 We discovered a few delights such as the statue above, the old streetcar below, and the Seoul Museum of History (which I sadly did not have time to explore). There was also a lovely little covered excavation preserving storefront layout from the Joseon. 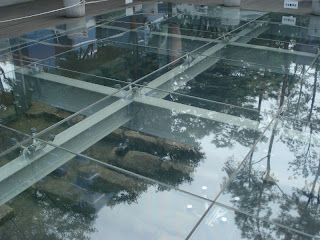 Also over this way is the much quieter and quainter Gyeonghuigung (경희궁), or Palace of Serene Harmony. A great place to go for a break from the busy-ness of Seoul, Gyeonghui was built to harmonize with the surrounding landscape, giving it a wonderfully peaceful air. This is also helped by the fact that it's the smaller sibling of the other 4 great Joseon palaces and, so, was nearly empty of tourists when we visited. Entry is also free. 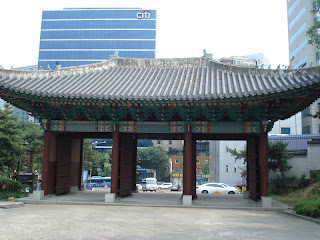 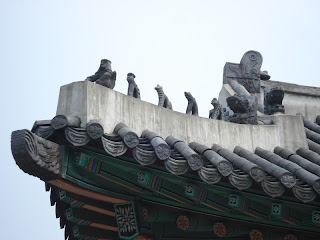 Apparently hour-long Taekwondo demonstrations are regularly held on the grounds. Sadly, we didn't manage to catch these.

Next, it was time for me to dash down to the Sinsa (신사 - pronounced Shinsa) area to meet up with some family. While I don't have any pictures. The area is a lovely part of town, and well worth visiting. Its filled with quaint boutiques and larger unobtrusively placed chain stores. Perfect for shopping. It was here that I also finally managed to try Korea's summer specialty: Naengmyun (냉면) or, literally, cold noodles.