A few weekends ago, I joined one of Pedro's trips down to the beautifully stunning island of Namhae (남해). Located about 2.5hours south of Gwangju, Namhae is known as Korea's treasure Island for it's unspoiled, still largely agricultural, beauty; with many terraces and rice paddy's built into the steep mountain sides that descend into gorgeously clear waters.

Our first glimpse of Namhae came as we exited the mountains on the mainland and emerged on the coast, only to see - No! It couldn't be! The Golden Gate Bridge? We couldn't possibly have driven that far! 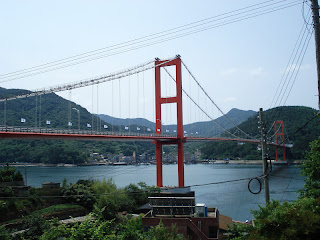 Built in 1973, the bridge connects Namhae to the mainland.  This view is made even more stunning by the small islands dotting the seas surrounding the area. This view was our introduction to the island in more ways that one. Namhae is not yet sufficiently touristy (a great blessing!) to warrant a viewing platform at the bridge. Instead, we stopped at a small market outpost by the side of the road. It was here that we first came to realise that alongside rice, onions and garlic play a huge role in this region's economy (so much so that there are quite a few statues of garlic located on the island!).


Although it is certainly not the biggest of Korea's islands, Namhae's jagged coastline and rugged mointains make for long (and stunning) journeys when trying to get around. On our way down to the southern-most tip of the island, we stopped for lunch at a house located in the German Village (built entirely in the German style and with German Materials by Koreans and Korean-Germans who went to Germany in the 1960s to find work and later returned). Worth the peak in, the house contained some of the oddest assortments of objects I've ever seen.

My favourite discovery of the stop, however, was a toad. No, really, a live toad. It was adorable and beautiful and... well, I'll just let you see the picture below :).

Winding along the coast (breathtaking), we eventually made our way to the now-famous (after having it's beauty captured by a TV commercial) Dareangi Village where we stayed the night with a local 할머니 (halmoni, or Korean grandmother). Built into a steep ocean cliff-side on 108 terraced steps, Dareangi Village (다랭이마을) is made even more beautiful by the pastel coloured roof and stucco wall paintings that adorn all of the homes.


Although the island does support some beautiful sandy beaches (more on those later), the coastline around Dareangi is rather rugged and forbidding. Still, clear blue water calls out on a hot day and, so, we made our way down to a local stone (the locals claim 'pebble' but I've never before seen pebbles quite that large!) beach. 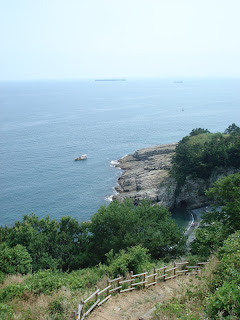 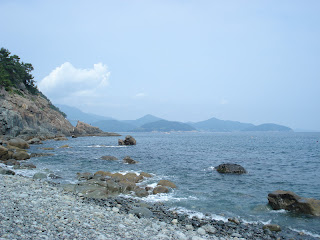 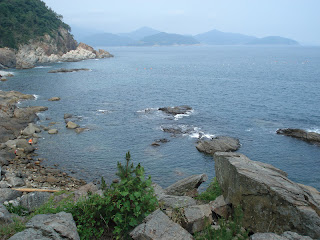 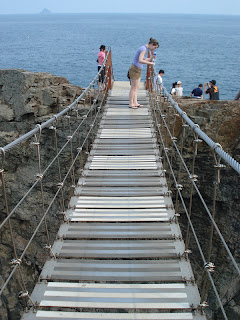 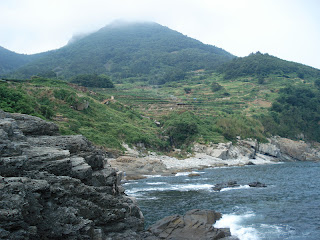 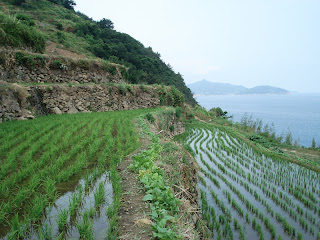 After a night spent roasting marshmallows in a bonfire made at an abandoned school yard (in the pitch black), it was time to hit up a proper beach!

But not before we got some great kayaking in *insert huge grin*. One of my favourite sports, sea kayaking in Namhae is not to be missed. The craggy coastline makes for all sorts of amazing coves and rock passages, with loads of interesting sea life to check out. Also - waves ^_^. I got thoroughly toasted and salted in our 3+hrs out on the water but it was well worth it. Wish I had more pictures, but I was, unfortunately, not brave enough to risk my camera in the venture.