A few weekends ago I decided to skip out on the famed Boryeong Mud Festival and hop on the 3hr30minute bus eastward to Daegu (대구). In addition to being Korea's 4th largest city, Daegu was my third choice (after Seoul & Gwangju) of potential places to live in Korea. This, combined with the fact that I have a number of friends living there, makes it fairly embarrassing that I had not yet been :P. That having been said, waking up at 5, deciding to go and hoping on a bus with no warning is not exactly conducive to meeting up with friends - I guess I'll just have to visit again sometime ;)! It is, however, conducive to random encounters with fellow travellers and the making of awesome new friends :).

The first thing I did upon arrival in Daegu was to hop on the subway heading toward a different bus station from which I could catch a bus heading 1.5 hrs back in the direction I had just come from. While this may seem a bit of a daft and counterproductive move, it is, in fact, one of the only ways to get to Haeinsa (해인사), one of Korea's most important Buddhist temples. Nestled mid way up in lush rolling mountains, this beautiful temple was originally built in the 9th century but has been renovated and reconstructed quite a number of times in the intervening centuries. 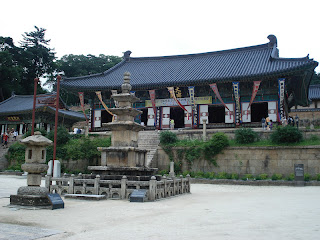 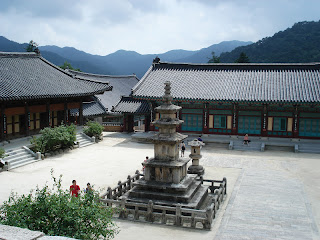 While it is a beautiful temple, that would not normally be enough to drag me so far out of my way given that there is such a profusion of temples in Korea. What Haeinsa is most known for, however (and what has led it's classification as a UNESCO world heritage site), is something far more notable than just beauty. It's the fact that Haeinsa is home to the Tripitaka Koreana, the oldest, most complete and accurate collection of Buddhist scriptures written in Chinese script.


The Tripitaka is contained in 52,382,960 characters written on 81,258  70cm x 24cm, 2.6-4cm thick wooden printing blocks. They were first carved in 1087 but were destroyed by fire during the Mongol invasions of 1232. They were ordered re-carved by King Gojong shortly thereafter. This process took 16 years (from 1236-1251). These blocks were moved to Haeinsa in 1398, where they have remained to this day as the main reference source for Chinese speaking Buddhist monks and scholars. 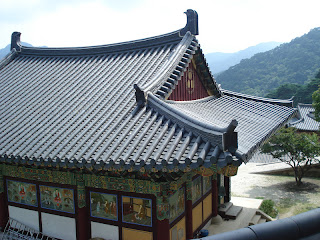 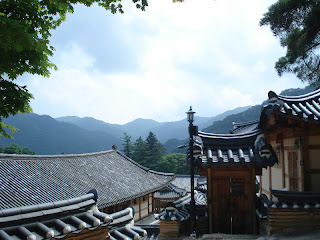 After wandering around the temple area with my new-found travelling friends, it was time to head into Daegu to check out the city proper. Although I'd heard tell that Daegu was not exactly a pretty city, all of my impressions were to the contrary. Built on a fairly wide river, the city does seem to be a bit bisected, but it's lovely none-the-less. The city centre was nothing short of bustling. I was also duly impressed with the existence of a proper downtown. Gwangju is not exactly hicks-ville, but we have no true city centre, rather we have a collection of hot spots. Daegu, by contrast, has a properly pedestrianized and beautifully groomed shopping zone with markets and restaurants off to the sides! 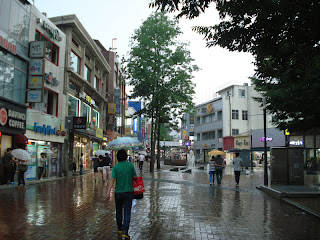 Even a sudden drenching downpour didn't daunt my enthousiam for the city, and I loved the excuse to explore the winding back alleys that form the traditional markets.


While wandering in hopes of encountering a foreigner bar where I could search out some friends and a place to stay for the night, I instead encountered fellow travellers (or in this case, fairly locally-based marines) with whom I wound up continuing to explore. Once they had returned to base, it was off to the jjimjilbang (찜질방), bath house, for me for the night. In randomly asking passing Koreans, I was directed to a place called 궁전 라벤다 (or Lavendar Palace) over near the express bus terminal (which I must say, is nowhere near as nice as Gwangju's though it did contain some interesting furniture - see below).

What a find that was! Not only did they have a DVD-bang (movie room), PC-bang (computer/gaming cafe), restaurant, noraebang (think Kareoke), mini-put & driving range (dead serious), they had a roof-top terrace! All of this, of course, to be enjoyed wearing your jjimjilbang-supplied bright orange loose shirt and shorts post-bathing. Making friends with the roof's other occupant (a fellow Gwangju-ite! Though a Korean one.) enabled me not only to escape the snoring old men sleeping elsewhere (jjimjilbangs, though cheap and awesome, rarely supply a restful night's sleep) but allowed for some great Korean practice accompanied by a dazzling view of the city (only 7th floor, but Daegu is hilly and surrounded by mountains on all sides) and a nice cool breeze. Unfortunately, I have no pictures of this experience as I felt awkward taking photos in a bath house...

While my initial intention had been to head out bright and early the next morning on a hike up to the giant stone Gatbawi (갓바위) Buddha located in Palgongsan (파공산) Provincial Park on the outskirts of Daegu, the overcast sky and pull of lounging in a pool proved too strong, and I wound up spending several additional hours soaking myself. While the Lavender Palace didn't seem to have too many oil pools, they did have a Dead Sea Salt pool (affording much less buoyancy than one might expect ;) ), a proper ice room (with huuuge sheets of ice on the walls), several saunas, hot pools and a cold pool done up as a grotto complete with stalagmites & stalactites (or at least this is what was found in the women's portion, no idea what was in the men's!). Oddly, while I had no problem with the ice room, all of the ajummas (middle aged Korean laddies) were snickering at how long it took me to coax myself into the cooler temperatures of that pool.

Once I did finally set off, the overcast skies provided the perfect hiking weather - definitely a necessity for that hike! I've never felt so out of shape on a hike before. It's only a 2km climb, but it's a 2km climb directly upwards! My one consolation was that all of the Koreans seemed to be as winded as I was :D. 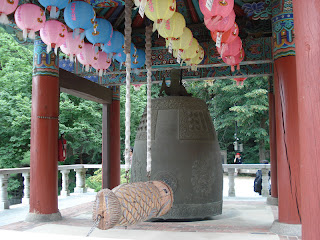 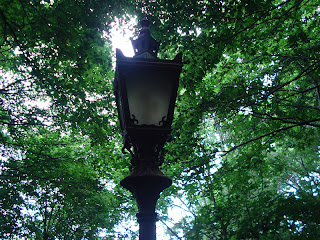 Once back in Daegu, I had just enough time to check out the city's famed Oriental Medicine Market - though I must say, it's more like a long street of shops than it is a market. Never-the-less, it was neat to see the large quantities of interesting fungi, herbs, plants and animal parts. Perhaps more impressive is the sheer amount of ginseng present in the shops on those streets. I wonder how much it's all worth?

On the whole, a thoroughly enjoyable weekend. I definitely think I need to get back to Daegu at some point!