Last week we took the students on a post-exam field trip to the 2012 World Expo, which just happens to be taking place in the nearby port city of Yeosu (여수) located roughly 2 hours south of Gwangju. Despite the rain (and there was a lot of it. It managed to permeate my umbrella so that I was soaked through before I even made it to school to catch the bus!), it was a pretty cool day. This year's expo theme is "The Living Ocean and Coast", so what better place to host it than in a port city? 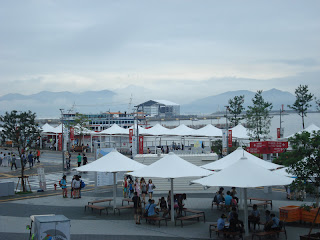 Rather than wandering around with the other teachers, I decided to tag along with different groups of students - definitely a wise choice, as getting to see the excitement on their faces at the aquarium was pretty awesome, as was watching their delight when they started catching crabs by the shoreline (I left some a group of boys after about 10 minutes of this only to return an hour later to find that, not only were they still there crab-hunting, they'd been joined by a great many of the other boys. Funnily, they kept complaining to me every time one of them got pinched by a claw :P).


As we were only at the expo for 6 hours (shame, that, there is a great deal to see!), I didn't have the opportunity to check out too many of the national pavilions in the international area. Those which I did see and which are worth visiting included Japan, Switzerland and France. Japan's pavilion used animation to tell the story of hope after it's recent Tsunami-induced disaster. While the story is a bit contrived (there are English subtitles) the stunning 3D holographic animation in which it is told makes the experience breathtaking. There are long lines for this, so pick up your ticket (at the Japan pavilion) in advance. The Swiss exhibit was made wonderful by the inclusion of a glacial ice core and information surrounding environmental data collection. Definitely cool to see. France I just liked for the inclusion of jelly fish and a cute colourful aquarium at the entrance.

My main focus of the day was on exploring the theme pavilions (and watching my students catch crabs). My two favourites of the ones I managed to explore were the Marine Industry & Technology Pavilion, which primarily involved a hilariously k-pop-y discussion of the benefits of kelp set in a future undersea laboratory (I got the feeling the presentation was mainly geared towards kids - English subtitles once again) and the Expo's 'Eco-Friendly' Aquarium containing 34,000 animals of 281 different species . While I'm not usually a huge fan of seeing animals in captivity and would have preferred to see the Baikal Seals and Belugas in larger tanks, the aquariums 360° Aquadome was fantastic. What can I say, I was won over by having sea turtles, hammerheads and a number of other large marine species swimming directly over, under and around me :). 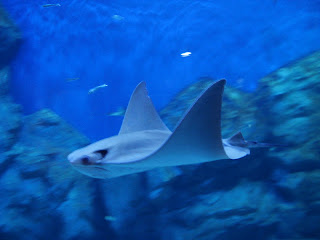 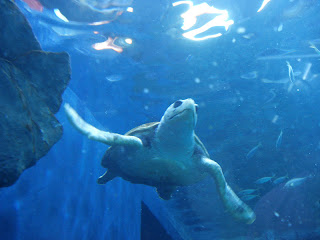 While the rain, sadly, kept me from staying for the evening's free K-Pop concert (I decided instead to catch the bus home with my school - shame, it would have been nothing short of awesome to have seen 2PM and miss A live), the sky did clear around midday, allowing us to catch the Korean culture and talent show occurring out near the 'Big O'. 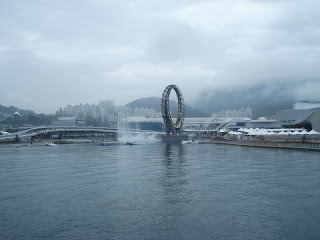 All in all, it was a pretty great day. I definitely recommend going if you get the chance - although chances are limited since the expo period ends on August 12th (it's been on since May). Single day tickets are 33,000won, double days are 53,000. All concerts are free for ticket-holders and there are a number occurring on any given day. I recommend going on a weekday as weekends can get pretty busy and lines will be long. For more info on the expo, please click here. For a map & pavilion details, click here. For a listing of K-Pop concerts occurring on the ground, click here. Note that there is a free bus to the expo departing from and returning to Gwangju. I don't have any of the details. I do, however, know that seats must be booked 3 days in advance.
Posted by Ally S at 11:35 PM