Last weekend I (finally) managed to take advantage of some gorgeous weather and the need to run errands, and went on my first true bike ride around town since arriving here. Well... I suppose that's not entirely true. Having been so excited about finally acquiring a bike and the time to use it, I also went on a bike ride the weekend previous  - in the pouring rain (sorry Jason for dragging you along!). While monsoon season was due to start a month or so ago, it only truly started two weeks ago, just in time for me to insist on riding my bike :D. It was actually a great deal of fun (I rode in the rain plenty while living in England, but never in a true downpour!). It was not, however, conducive to taking pictures. This past weekend's ride was just the opposite, with gorgeous nearly clear skies allowing for some lovely photo ops. Check out the pictures below to see some of the sights I regularly see on my bus rides into town.


While I thoroughly enjoyed my ride into town, it was possibly one of the most harrowing rides I have ever undertaken. I live out on the west side in an area that is separated from the rest of the city by two arms of the river and the expansive area of floodplain between then. Rather than cycling the winding route along the river, I'd decided to take the more direct route along the roads. While the freeways and overpasses were quite comfortable to cycle, with wide and well maintained cycle paths, these all but disappear on the larger, non-freeway, roads and cycling becomes either a fight not to be run down by the buses (who I previously thought only had it out for motorists and pedestrians, nice to know they choose their targets in a fair and equitable fashion :P), a jungle expedition through thick tall grass, or a game of thread the bike through the cars parked up on the sidewalk (this latter route, though time-consuming, soon became my favourite). While I've been told by many cyclist friends that my normally 45min bus ride into town is much faster on a bike, this route took me nearly 1 hour and 30 mins! I'm not sure whether this is due to my inability to cycle rapidly, the thirty-some-odd degree heat (Celsius), the amount of times I stopped for photos or the fact that I have no gears on my bike. Non-the-less, it was a thoroughly pleasant ride.

After finally making it into town and running all my errands, I saw that I still had plenty of time until dusk and decided to check out some of the sights that I had here-to-fore not had the time to see. Chief of these was 5.18 memorial park in Sangmu, which celebrates the lives and deaths of the  hundreds to thousands (the death toll is not known) of Gwangju citizens (mostly students) who took up arms from May 18th to 27th in 1980 and died fighting for democratic rights for all Koreans. Known as the Gwangju Massacre, the event and the sacrifice of the martyrs is considered significant by all Korea, with May 18th established as a national holiday. It carries a special weight here in Gwangju where the incident occurred and where many people remember the event and victims personally.

The park itself is absolutely lovely (as any park celebrating life, liberty and perseverance really should be), with lovely monuments, bike and walking paths, fountains, workout stations and shrines. The atmosphere is also supremely friendly and warm, with people greeting one another and conversing with strangers. There was even an older man playing the accordion at one of the pavilions and a group of flute playing university students at another to complete the experience. It was almost impossible to remember that one was right in the heart of downtown! 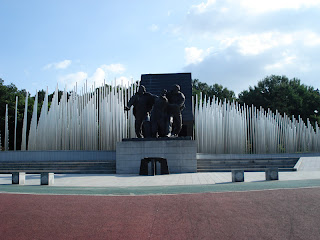 Riding home along this route, I also had the opportunity to ride along the floodplains which, while not exuding the prettiest scent in the world, make for some beautiful scenery. 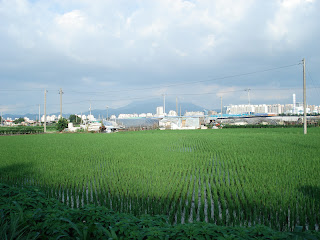 One of the other things I love about Korea is how friendly and welcoming everyone is. After rejoining the river for the final leg of my journey home, and just as my stomach was beginning to make itself known, I was waved over by two young families (with 3 lovely children each!) who were having a barbecue under a bridge. Inviting me over and sitting me down, they ensured I was well fed as we watched the sun set over the river, stuffing me with meat, beverages, mouth watering sea food, side dishes and desert (the children were insistent that I share their cookies and fruit). Such warmth is both incredible and normal. While I was a special guest in the sense that I was a foreigner and, so, the adults had many questions for me and the kids delighted in showing me their English, many passing Koreans were waved over as well and such sharing of food is a regular practice when eating outdoors. Love it!