So I decided to  run off to Seoul for the weekend to get in some dancing. I have to say that although the trip cost roughly $60 return and took between 2h50 and 3h30 each way (I took the bus there (cheaper and more comfortable) and the train home (faster but more expensive)), it was definitely worth it :D. 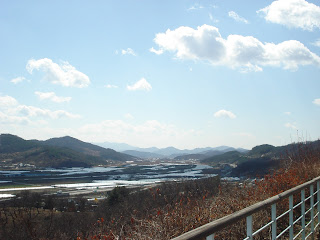 This was the view from the mid-route bus stop. It made me think we really need to learn a thing or two about rest-stations in the west!

The station was complete with playground, shopping mall and viewing platform!

I also managed to get some shopping done at the express bus terminal - $15 for a great spring jacket! - before running off to class.

The dance classes at Seoul Tanz are truly fantastic. I took not only an advanced ballet class, but a contemporary jazz class that was phenomenal :). To top it all off, the studio is on the 13th floor of a building in the bustling Sinchon area of Seoul. These are the views from their terrace :). 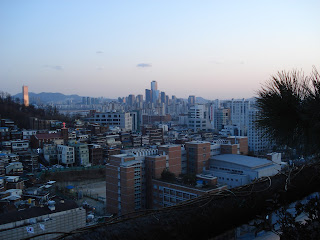 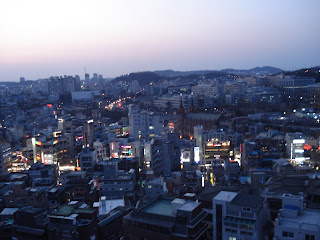 As dance finished a few hours before I was due to meet up with Minjung, I took the opportunity to wander (read: shop) through the Sinchon and Hongdae areas at their liveliest - on a Saturday night.

Sinchon is really neat and lively, but nothing compared to the backstreets of the Hongik University area (Hongdae). Smalls streets filled with clubs, art, street shops, food, music, hordes of young people and, best of all, amazing buskers! 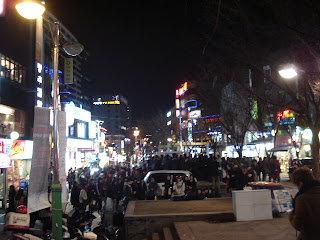 Here's the crowd gathered to listen to one of the groups sing.

After a delicious dinner with Minjung's family and a good night's sleep, it was time to hike Gwan Ak San.  Minjung's parents, along with dozens of other athletic Koreans, make the 4 hour hike every weekend, and having seen the views, I can definitely understand why! 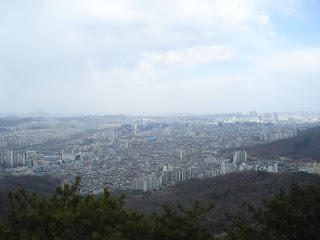 Seoul from the south. 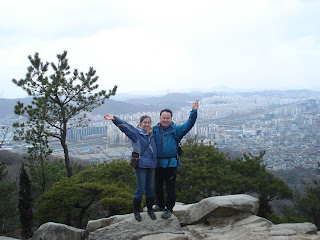 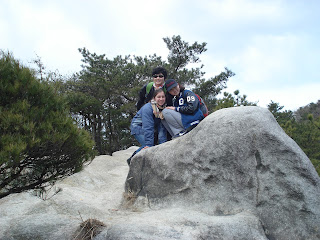 The scores of colourful weekend hikers that can be found on mountains all over the country - proof, in my opion, that hiking should really be named Korea's official national sport. 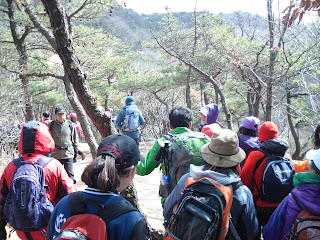 We also saw some awesome rock climbers and an ancient stone dog on our way up. 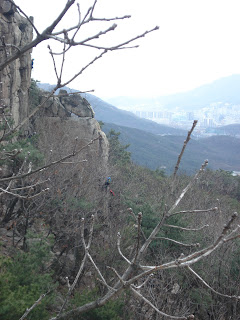 While it was a gorgeous day over all, there was still snow and ice at the top, and we did get a few flurry's on the way up. 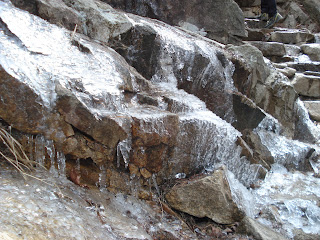 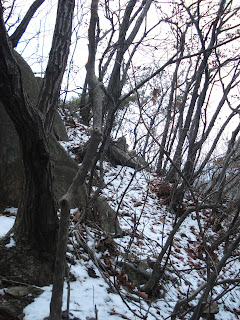 Also at the top, as with so many mountains in Asia, was a beautiful Buddhist temple. 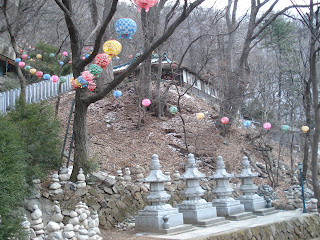 Post-hike, it was time for some delicious Korean pancake and sea-food soup before hoping on the train back to Gwangju. Amazing. 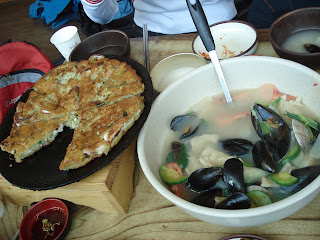 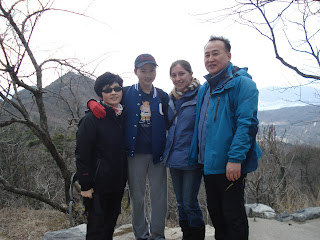