Last Weekend a bunch of us got tickets to the season opener for the Gwangju Football Club - Gwangju's K-League (the Korean Professional Soccer League) team. 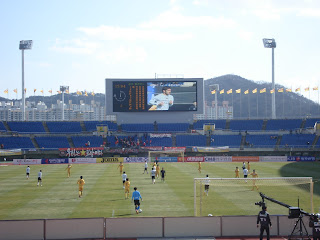 Gwangju, in their lovely yellow jersey's, were playing the Pohang Steelers - last season's top team. While it wasn't the best soccer I've ever seen in my life, it was a pretty fun game, with Gwangju sneaking in an early first goal and holding off the Steelers for a quite a while before the Steelers managed to tie it up.
The best part of the game however, was definitely the fans, we were seated beside the Gwangju supporters - and boy do they love their team! They were a lot of fun, singing, shouting, drumming, waving their flags and cavorting with Gwangju's mascotts - two bright orange chickens (I'm not joking). 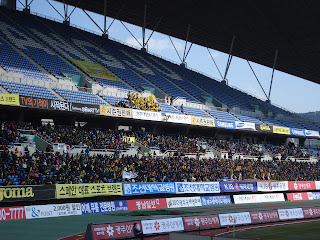 It was also great to get a change to check out Gwangju's World Cup Stadium, left from when South Korea and Japan jointly hosted the 2002 World Cup. It's a gorgeous open air stadium with really simple elegant lines. I'm definitely a fan. 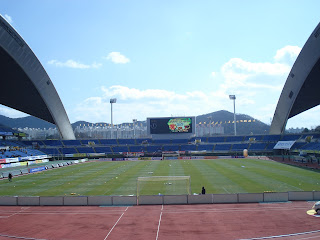 The only downside to the day was the fact that (despite the glorious sunshine) it was freezing cold! So cold in fact, that it was snowing on my way to the stadium. Now, this wouldn't normally be odd, Korea does get some snow in winter, except for the fact that the day before we'd all been out playing frisbee in our t-shirts!
Posted by Ally S at 5:32 AM