Right, so I've held off this long, but anyone who knows me knows that I love food. Thus far everything has been delicious. Some things I like more than others, but overall, it`s been great - especially, oddly enough, the cafeteria food at my school!
We had our staff dinner the other day however, and I felt there were some dishes that might be of interest. 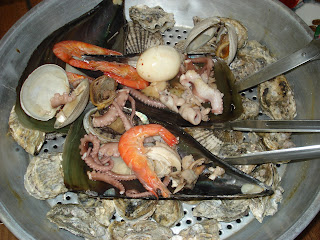 (this is a picture of the pot after we'd half decimated it. Yes, those are oysters lining the bottom, there were more before we got to them!)
The seafood was amazing, as were the two courses (seafood soup and seafood bibimbap (mixed rice) ) that followed. What was most notable for foreigners (or 'waygooks'), were the side dishes. While anyone who's ever had Korean food knows that all meals come with an endless supply of refillable side dishes, I had never had one of these particular side dishes offered to me before. 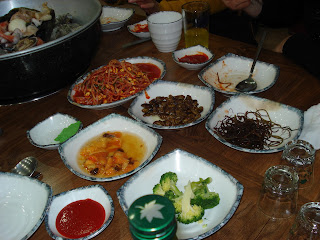 The upper central dish in this picture is silkworm pupae! Since having them last Friday, I now seem to encounter them everywhere. At street stands. In pubs. You name it, they're there! I have to say that, while they don't taste bad, they're not my favourite. The flavour and texture are really hard to describe. I might do better as I encounter them more and more. 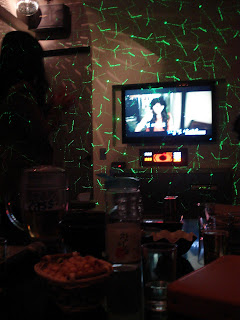 After dinner, it was off to the Norebang (Korean karaoke rooms) for some singing. Sadly, as all of us were wiped out from the school week, we didn't get up to too many antics.
Posted by Ally S at 5:50 AM