Although I was initially disappointed by the fact that I live in the flatter region to the west of Gwangju and not closer to the mountains that border the city's eastern rim, I soon realized that "flatter" is an even more relative term than I had ever thought. Not only is everything on a hill here, there are miniature mountains in the middle of everything! (You can see many of these poking up in my hiking photos here.) I was happy to note on the first day of school that one such bump exists right near me and, today, I finally got the opportunity to investigate.

Here is what I found on the top: 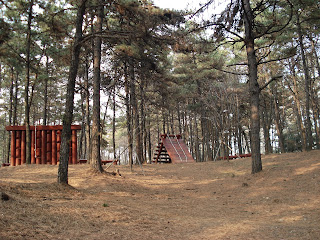 It made me so happy! Not only were there mini climbing walls, much like the hill tops in Taiwan and those we encountered on our hike the other weekend, this one had a full out door fitness gym! Unlike the other hilltops mentioned, this one also had two playgrounds, tennis courts and a basketball court! I have no idea how it all fit!
The best part of this discovery, however, had to be the adorable old man who saw me staring at it all in wonder and insisted on teaching me, in Korean of course, how to use all of the apparatuses! It priceless, he wouldn't let me leave until I'd completed all of my sit ups on the bench!
Posted by Ally S at 6:01 AM