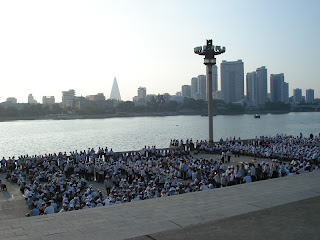 As Pyongyang is the capital and showpiece city for the North Korean government, I was told to expect it to be clean. Just how clean I could not have imagined prior to arriving. It's not clean, it's spotless. Never in my life have I seen a city so clean that it practically gleamed (actually, that's not true, the tourist district of West Berlin kind of felt that way). While this feeling is mostly due to the fact that a large amount of effort does go into keeping it looking this way (South Korea, I implore you, please look to your northerly neighbours for some anti-littering advice), it is definitely helped by the city's grandiose architecture. Large pristine white (or pale gray) public buildings and wide green-lined boulevards dwarf people cars and any other objects, making them seem more inconsequential as a result. While this is definitely by design - emphasizing the dominance of society as a whole over any smaller part - it's not a design I can criticize. A completely different feel from Beijing.

Sadly, the scale of the architecture combined with small population size (relative to Beijing I mean, total pop. of Pyonyang as of 2008 was 2.5million in a 3,100sq m area - that's 8 times fewer people in a 5th of Beijing's space) and lack of privately owned cars can also make the city feel somewhat empty or abandoned (though not if you're on the subway during rush hour!). Never-the-less, it's a beautiful city, and I should probably stop talking about it and show it to you instead! 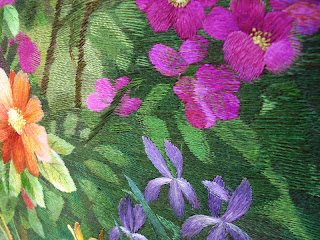 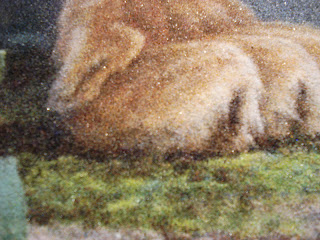 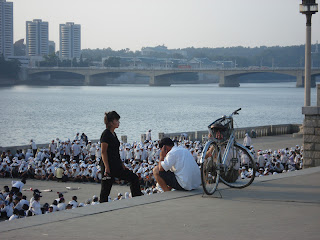 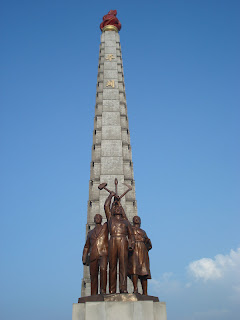 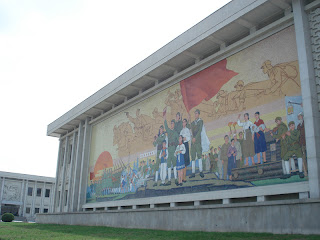 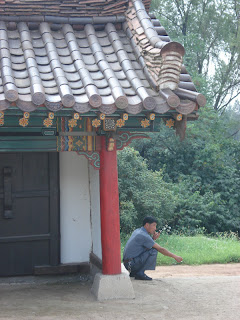 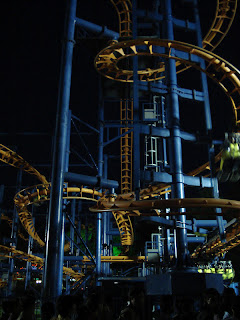 Did you join in the English or dance classes?

I've seen that kind of embroidery painting before. There's a Korean man who does it near Peterborough, and it's just an incredibly beautiful result. My parents have two tiny ones in their kitchen.

Also, I love that their hero statue is of the farmer, worker and artist.

Didn't join in the Dance class but I was one of the first to join in the English class - their level of proficiency was remarkable!

Yeah, that statue makes me happy too!