Having a Blast in Beijing

As Beijing provides one of the only ports of entry into North Korea, the city was initially labeled in my mind as a 'necessary stop-over' on my North Korean holiday (bet that was a sentence no one ever expected to read!). As I had a few extra days on either end of my trip and other friends who would also be passing through Beijing around the same time (and, who were actually planning to visit it) as well as a friend from highschool who was living there, I decided that maybe I should take five days to look around and explore.

Best decision I could have made. I ended up loving Beijing, when at best I'd assumed I'd just like it immensely. Perhaps I should explain, I had nothing against going to Beijing, in fact, I knew for certain that I wanted to go at some point. I also knew, however, that I would likely end up spending quite a bit of time there on later travels and did not wish to over-see it. Looks like that one's not an issue! 5 days was no where near enough! Oh, don't get me wrong, there are bad sides, the massive crowds, the pollution (which fortunately was not too bad while we were there), the summer humidity (also no where near as bad as usual) and the fact that most people just push and shove their way around you. But I just ended up loving the grittiness of it. The multi-layered history, shiny modernity and grimy-underbellied-ness of it. I also loved the contrasts between it and Seoul. People have often told me that Seoul is just a dirtier version of the major Japanese cities (not having been to Japan, I wouldn't know). If that's the case, then Beijing is their much much dirtier (I'm thinking just rolled around in the mud and then jumped in a sand pit-dirty) cousin. But it's also so much more than that. And it's not that it's 'dirtier' per se, it's more that you can feel the accumulated weight of centuries living side by side with you in an enclosed space. Or maybe it's just that, as the older narrower parts of the city act as both tourist attractions and residential areas, it's impossible to have that wide-boulevard shiny-clean feeling everywhere - well, except for where they've torn the old traditional residential hutongs down and put in glossy new purely retail ones. Thankfully they've stopped doing that due to public outcries. And it's definitely better that way, it's that closed in sense of breathing in life the way it's lived that makes Beijing so special - and I wouldn't have liked it nearly so much with out it. Then again, after living in conservative Korean society, it could also just have been the nonchalance of all the old men sitting out in the summer heat with their shirts rolled up to their armpits and their beer bellies exposed that attracted me to the city - but somehow I don't think that was the case :P.

A walk - Qianmen to Donghuamen


The Great Wall!
Made from a series of walls, ditches and other types of defensive fortifications, the Great Wall was built in various stages and phases, always with an eye toward protecting China's northern flank from invaders. While it fell into occasional disuse when invaders occasionally over whelmed the wall and took power, it's construction spanned millennia, beginning in the 7th century BC and continuing (sporadically) up to the early 17th century AD.

(A brief note here: It was amazing! I want to go back! Heck, I wanted to stay and just keep trekking it forever! We got lucky and our hostel was offering tours to a not-quite-yet-open portion of the wall near the Shixia Pass. It was both stunning and thankfully void of the massive amounts of tourists that we could see en route swarming the battlements at Badaling. Even nicer, however, was the fact that after some trekking, we made it passed the soon-to-be-open reconstructed portion of the wall and onto the unreconstructed portion. It was both great to see and loads of fun to hike!)


Not tired enough from our activities, we decided to walk to and climb the hill in Jingshan Park for a view of the sunset over the Forbidden City 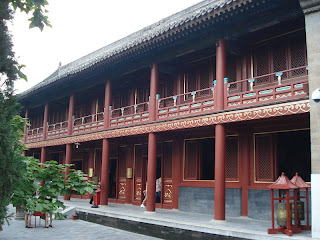 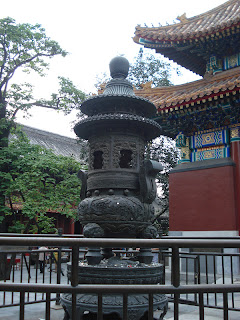 The Northward to the Lakes

The Temple of Heaven
Used by many successive dynasties to perform ancestor worship and prayers for good harvest, the Temple of Heaven was originally built under the directive of the Ming Yongle Emperor (who is also responsible for the construction of the Forbidden City) from 1406 to 1420 and later renovated in the 16th and 18th centuries.

The Summer Palace
A Ching Dynasty (17th-early 20th centuries AD) retreat consisting of gardens, temples & pavilions built on and alongside Longevity Hill (Wanshou Shan) and Kunming Lake, it's difficult - if not impossible - not to love this place. 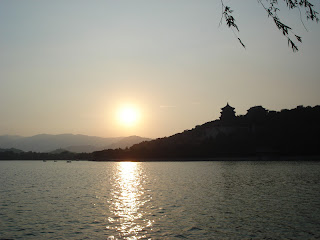 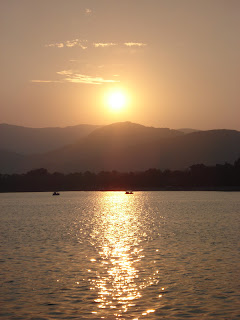 and, last, but never least: