Jindo & the Parting of the Seas!

Last weekend I joined the hundreds of thousands (no, really, there were actually that many, the traffic was incredible!) of people bound for Jindo. Jindo is the 3rd largest island in South Korea, situated just of off the southeastern coast and about a 2 and a half hour drive from Gwangju. It is famous for a number of reasons, not the least of which (for the Koreans at least), is the fact that it was here that Admiral Yi Sun-sin won the Battle of Myeongnyang in 1597 against a vastly superior Japanese fleet - defeating 133 warships with only 13 of his own. 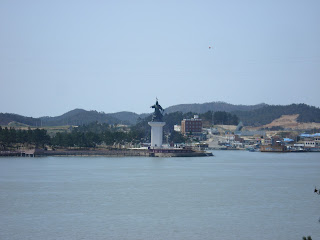 Among Koreans, Jindo is also famous for being connected to the mainland via the country's longest suspension bridge (at 484m long), as well as for being the origin of the beloved Jindo dog breed (called, rather creatively, Jindos). Internationally, it is most well known for the miraculous parting of the seas which occurs here annually - more on that later. 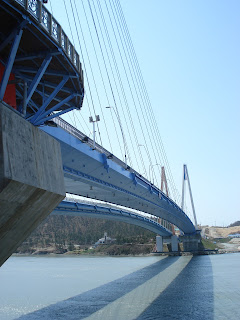 Knee-high and wiry to the touch, Jindos are reputed to be the most brave, loyal and intelligent of dogs. They have powerful hind legs and are very social. They are considered a national legacy, are only allowed to be bred true and are protected during times of war. While I had never heard of Jindos prior to  my visit to the island, I have to say, I was wholly impressed by what I saw. 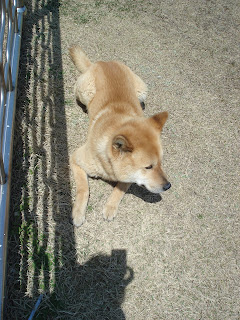 This adorable boy was only 4 years old, had only had 2 months of training and was apparently not too bright. 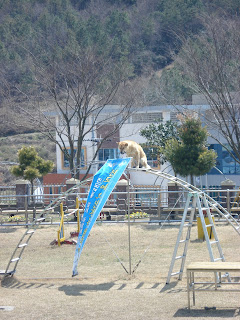 Never-the-less, he could not only perform feats of strength such as dancing on his hind legs and jumping through hoops, he also knew to unfurl the training centre banner on command. 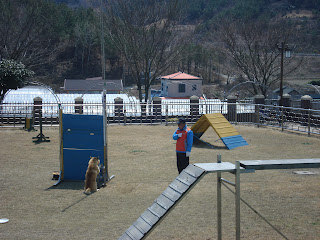 Perhaps even more impressively, he knew how to work the gear to hoist the flag when the national anthem was being sung. Even better, he knew how to turn on a light switch and open the fridge to fetch his master a beer! 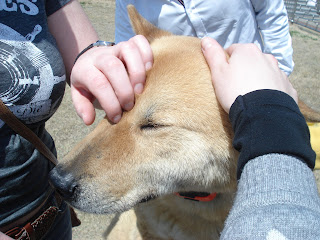 Getting some love and attention after showing off his skills. He was incredibly friendly!

After our visit to the Jindo training centre, we stopped at Ullimsanbang, once the home of 19th century Joseon artist Heo Yu who is famous for developing the Southern Style. The site sits at the base of Mt. Cheomchalsan and is now home to a beautiful park as well as the paintings of Heo Yu and the 4 generations that followed. I wish I had pictures of their art work! I'm not usually one for paintings, but that family is unbelievably talented! 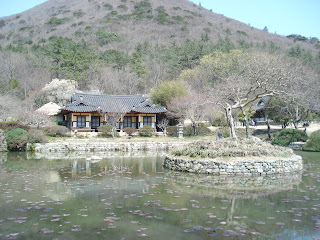 Although the afternoon's diversions were well worth the visit, they were also time kills, allowing us to arrive at at the oposite coast just in time to see (and experience) our true reason for being there - the Jindo Sea Parting Miracle. This 'miracle' occurs for only one hour, at low tide, on two consecutive days (usually in March or April) of the year - and it is awesome! Basically, tidal activity allows for the exposure of a 2.8km long, 40m wide, land bridge connecting the island of Jindo to the small island of Modo. Naturally the locals host a festival every year coinciding with the sea parting. It was great! 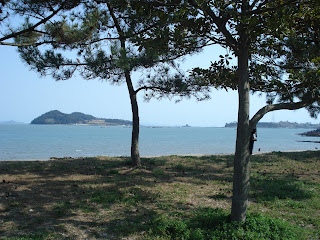 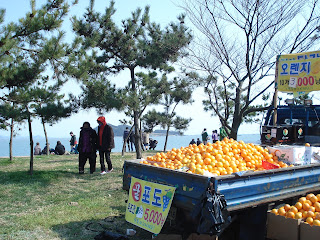 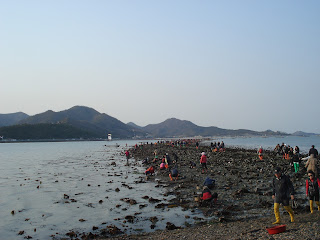 5,000won ($5) gets you into the festival with a food voucher worth that amount. Another 8,000won ($8) got you a pair of neon coloured thigh high rubber boots to keep when you went home. I went for bright orange :), they were impossible to pass up. 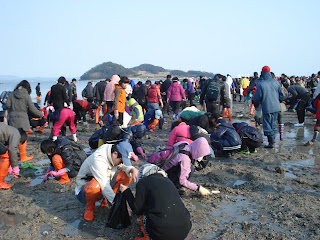 Many of the locals use the sea-parting as a chance to harvest fresh sea food. 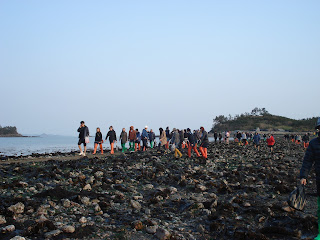 The range of boot colours available. 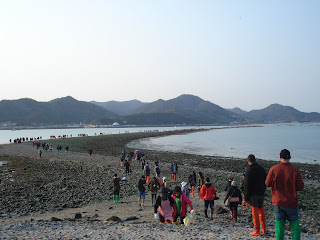 A view of the land bridge from Modo. 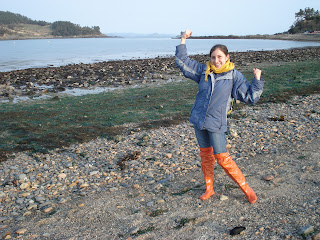 Celebrating having made it to the other side. 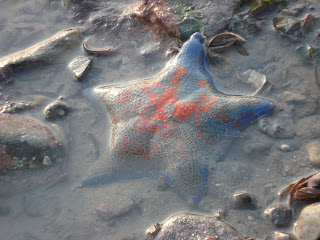 Some of the sea-life we encountered.

While I wasn't initially sure we would need boots quite that high, they definitely came in handy when we were heading back from Modo and the sea had already started to close! They are also easily now my new favourite article of clothing. The sea parting was definitely one of the coolest things I've experienced. There's nothing quite like being able to walk across a land bridge that only tens of minutes before was nowhere to be seen. Watching (and feeling) it disappear was also quite something! 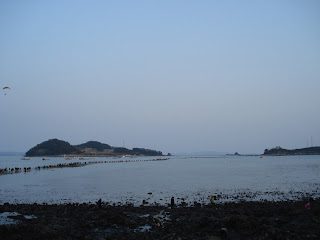 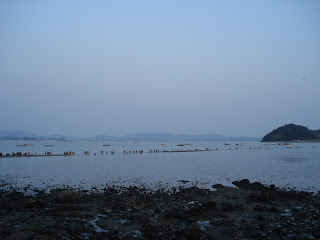 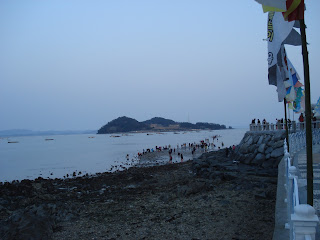 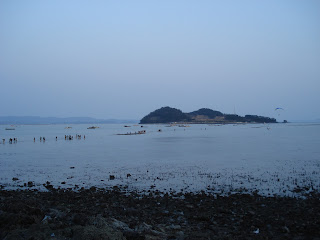 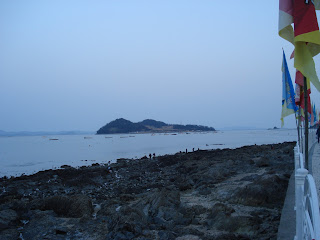 As with all such things, there is a great myth surrounding the Jindo sea parting. According to legend, the inhabitants of the island were the descendants of an exiled man who washed ashore there only to find that he shared his new home with tigers. Eventually, growing tired of being attacked, the inhabitants built rafts and departed for nearby Modo. Unfortunately, after their departure, they realised that Grandmother Ppong had been left behind 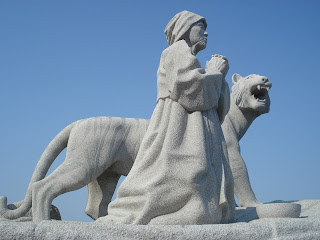 Longing to be reunited with her family, Grandmother Ppong prayed to the Dragon King of the Sea.  Receiving her reply in a dream, she was told that the next day, she should go to the beach for she would be allowed to cross the sea on foot. 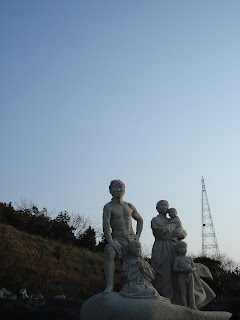 Seeing the land bridge form from the other side, her family hurried out to meet her. Unfortunately, our lovely story has a bittersweet ending. After meeting her family halfway, the walk took its toll on Grandmother Ppong and she passed away, happy because she was surrounded by her loved ones. In celebration of this, a band of drummers now sets out from each side when the bridge forms to meet in the middle and share their joy. 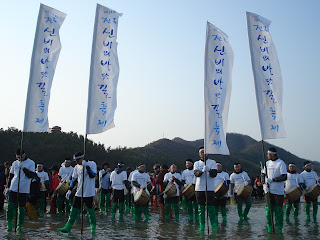 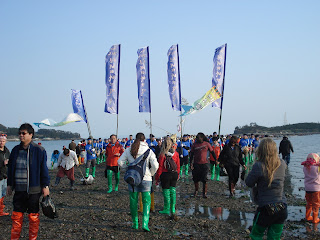