Although the forcast was calling for rain and we had no idea where exactly it was that we were going, this past weekend fellow EPIK teacher Larisa and I decided to hop in the car and tag along on Gwangju's Extreme Climbing Centre's climbing expedition to Daedunsan (대둔산).

Located in it's own national park about two and a half hours north of Gwangju, Daedunsan (or Daedun Mountain) is actually composed of a number of peaks, each with their own stunning views which, in the (admittedly autumn) sunlight, are meant to look something like this:

Beautiful, no? Pictures like these (which I only saw after returning home) have made me decide that Daedunsan is somewhere I definitely need to get back to!

While the initial plan called for us to camp just outside the small town at the base of the mountain, the extent of the rain had our fellow Korean climbers calling for us all to share an ondol room in a local cabin instead. Perhaps I should explain. Ondol rooms are large shared rooms with heated floors (ondol) and no funiture.  Rather than sleeping on beds or eating at tables, traditional Korean practice is to eat and sleep (on a mat) on the floor so as to stay close to this source of heat.

After a delicious shared camp stove dinner, complemented by some drinking, singing and dancing, it was time to go to bed. I'm not entirely sure how Koreans do it, but it was, by that point, 1am. Plan was to be up at 5:30 or 6.

Although it was still raining in the morning, plans were to go ahead with the climb and, so, we headed out :). 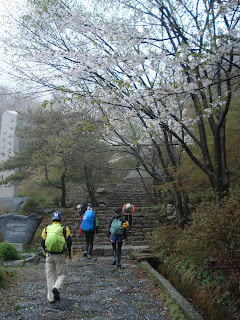 Despite (or maybe because of) the rain, the hike up to the climb spot was beautiful. There is something fairly magical about hiking alongside (and often having to zigzag across) a mountain stream in misty wetness. 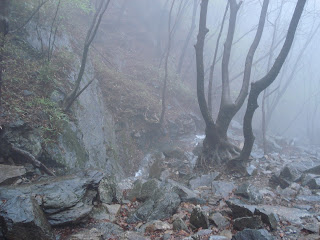 Ultimately, however, both Larisa and I ended up bowing out of the actual climb. Attempting a 7 pitch climb where all the pitches are minimum 15- 20m high and rated between 5.9 and 5.11 in terms of difficulty, and doing so in the rain, seemed like a bit too much of an adventure - even for me. Plus, after climbing only partway up the first pitch, I could no longer feel my fingers :P. 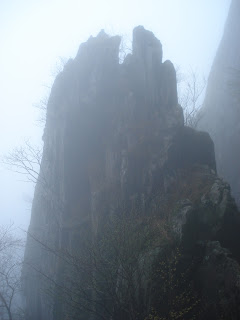 Rather than waiting around or (doing the arguably smarter thing and) seeking shelter, I decided instead to join two of the guys who had decided to hike up another route to the top.

I say hike, but I'm using the term loosely. It was more of a mad scramble on slippery rocks - it was also very fun and so very very worth it. While we weren't treated to the incredible views you would normally see, there is just something so incredibly cool (sorry, not other words adequately describe it) and otherworldly about hiking up a mountain crag surrounded on all sides by mist, fog and rain.

Here were some of our views: 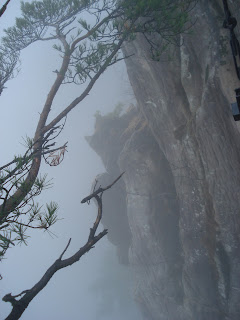 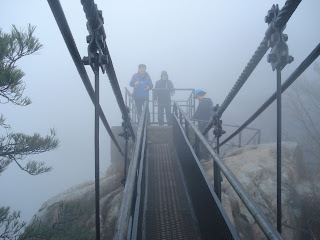 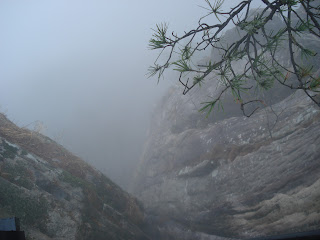 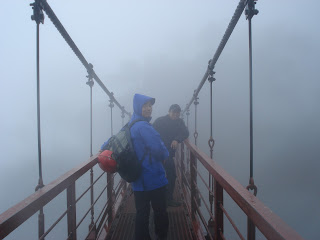 (My hiking buddies. I don't think they enjoyed it quite as much as I did when I set the bridge swinging by jumping on it ;) ) 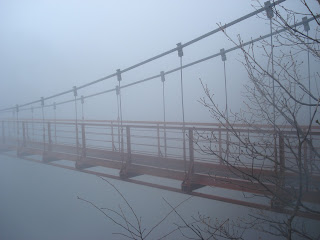 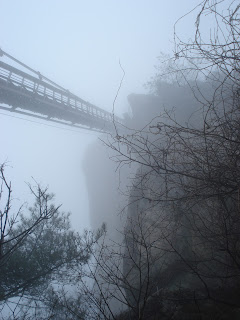 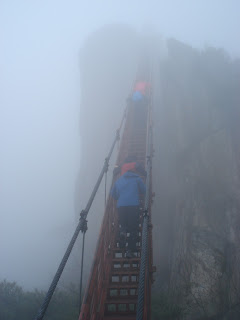 And at the top: 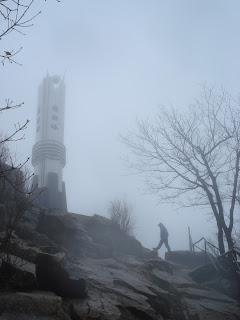 (I swear he's part mountain goat, he made it up there so fast!) 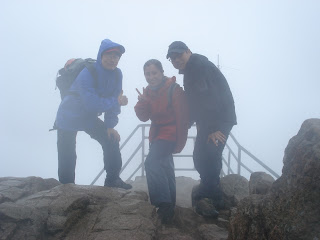