Once More to Seoul

A few weekends ago, I trekked back up to Seoul to catch up on some dancing and, more importantly, to meet up with and celebrate the early birthday of a dear Kiwi friend who was visiting on some academic diplomatic work. This gave me not only to opportunity to catch up and hang out, but to check out some new areas of Seoul. While I’d heard a great deal about Itaewon , or ‘the foreigner district’, I hadn’t yet had the chance to visit – and boy was it a shock when I did! Living in Gwangju, you don’t see that many ‘Waygook’s , or foreigners, around. I can sometimes go entire days (or even a week) without crossing paths with other foreigners (there are roughly 10 000 of us in a city of roughly 1.5million). In Itaewon, the population is so mixed that you may as well be in Toronto. While it is in many ways a wonderful feeling, it’s also very odd. Unsurprisingly, especially given the widespread perception of foreigners as party animals in Korea,  Itaewon is also one of the busiest night districts in Seoul (as well as one of the best places to by nearly authentic looking knock offs that will set you back almost as much as the real thing). It’s also a great place to chow down on some international food.  Sadly, so engrossed was I in meeting old friends, that I don’t have any pictures of the area.

After catching our fill of the Itaewon area, it was time to check out the night life in Hongdae. Filled with time shops, eateries, winding streets, clubs and bars, this area of the city never seems to sleep – indeed, some of my friends recently watched the sunrise from a lovely roof-top bar, a not-exactly rare occurrence in the district. The area is great fun, but filled with a very university-age crowd.  While I greatly enjoyed myself, I’m told that at some point I’ll need to check out the more polished Gangnam area clubs.

After a lovely lie in, I decided to use the remainder of my Sunday morning to explore the central area of Seoul on foot while my friend attended meetings.  True to my usual techniques, I wound up walking all the way from Gyeonbuk palace, up Namsan Mountain and back. Here’s what I found along the way: 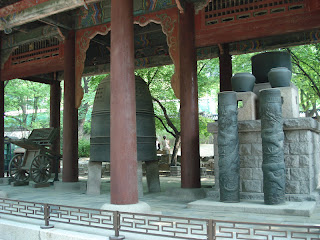