Not sure yet how the jet lag or 12hour time difference are going to hit me but woke up this morning at 6am Taiwan time after going to bed around 1am, so it doesn't look too shabby yet - that being said, it brings the grand total of hours that I have slept in the last 36 up to 8... Should be doing fine?

Arrived in Taipei last night on a beautiful sunset flight from Tokyo. It's a pity that those three hours of travel time were the three I slept. What I did see of the flight included periwinkle blue and white clouds floating between a deeper blue sky and a paler blue pacific, rimmed by pink and gold and topped of by a pale nearly-full moon. I'm sure with my lack of sleep I'm not doing the scene the justice it deserves but it was beautiful! I'm also told there was a great burning orange sunset visible from the other side of the plane but, that I completely missed!

I'm not sure weather the having a night landing in Taipei was unfortunate or exciting. Regardless, coming in from the ocean, the first thing you see are the bright lights dotting the harbour before the sparkling mountainous island seems to just rise out of nowhere. It's truly spectacular and I can't wait to see it during the day! Unfortunately, I couldn't quite capture the image due to the darkness of the night and speed of the plane.

We managed to meet up with some fellow SayTaiwan Centennial Homestay-ers on our flight from Tokyo and all of us received a very warm welcome (both in terms of the weather and the people) upon arrival - there were signs in the airport and everything! 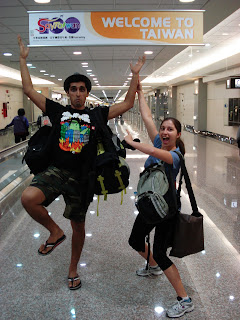 I think Kunal and I may have been a bit excited to arrive... also, as a side note, do you have any idea how much the average traveller carries weight wise in their carry-on? We do! They were conducting a survey at Narita Airport so Kunal and I volunteered to be weighed. 26lbs was how much I was carrying! Kunal only had 20... being 60some-odd pounds lighter than he to begin with, I think this is oddly amusing ;)...

The volunteers who met us at the airport were uuber friendly and helpful, making sure we got our phones, teaching us some mandarin and getting us on to the right forms of transportation to disperse us around the country. I left Kunal in Taipei and, joined by others from places such as Brazil, the US, Algeria and Jordan, headed toward Taichung to meet my absolutely lovely host parents Cathy & David :). 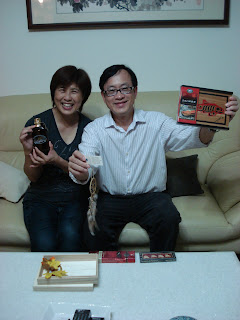 After a brief exchange of living necessities and Canadian gifts (including the requisite maple syrup of course) it was time for a brief email home to state that I was still alive and then off to bed. By the time I finally arrived at my new home it was 12 midnight Saturday morning local time /12 noon on Friday Toronto time - a full 29hrs after having left home in Toronto on Thursday morning.

Looking out my window I can see the pastel colours of Taichung, the green-ness of the parks and all the little minuscule (I'm on the 14th floor) people doing their morning exercises. That, combined with the crazy-exciting super-packed schedule my hosts have planned for me, has made me excited to get started. That being said, I think I might take another short 2hr nap before I decide to truly start my day ;).
Posted by Ally S at 7:09 PM

As always Ally's blogs are full of inspiration, energy and a hint of ingenuity! I loved this post, keep em coming.