The Fulfillment of a Dream - Seeing the Last Arirang Mass Games


I can still remember my reaction the first time I ever saw footage of the Arirang Mass Games (아리랑 축제). It was a jaw drop followed by an exclamation something along the lines of "HOLY AKKKJAMARAFURAWKA! I definitely need to see that one day!!!!". I think it was probably around that time that my interest in visiting North Korea was truly piqued (what can I say, I'm a sucker for synchronicity and displays of prowess) - and I'm so glad I made the trip when I did! After ten years of Arirang, the government has recently announced that this year is to be the final one. Plans are in the works for a new, different, show to be staged in the next few years (guess that means I'll have to go back?).

North Korea has long been famed for their mass gymnastic displays (it was they who were responsible for the choreography and training of the Chinese performers in the 2008 Beijing Olympic opening ceremonies) and this was put to great use in 2002 when Kim Jong-il commissioned the first Arirang Mass Games in celebration of his (by then deceased) father's 90th birthday. Involving some 100,000-120,000 performers and taking place in the biggest stadium in the world, Pyongyang's Rungrado May First Stadium (릉라도 5월1일경기장), the games are nothing short of impressive.

Over the course of 90 minutes, the show tells the history of North Korea (and in recent years, of it's friendship with China) in five acts. It is set to the famed Korean song 'Arirang' which tells the story of two lovers forced to separate by war. The song is lovely and haunting and is used throughout the show as a metaphor for the tragic division of Korea into two separate countries. On the whole, the show is replete with political iconography and rich in traditional Korean and North Korean symbols. If anything, this makes it even more interesting as a demonstration of how the party wants itself and it's history to be viewed.

Everything about the display is astounding. The sheer number of people involved, their perfect synchronicity, and the wonderful choreography made me want it to never end. Perhaps even more amazing than the performers on the ground, are the 30,000 some-odd well trained school children sitting in the stands behind holding coloured cards which they change with perfect timing in order to create the backgrounds for the scenes. Performers practice for months in advance and the show is usually nearly sold out (both to foreign tourists paying anywhere from 80-300EUR and to locals and other DPRK citizens who can attend for much much less) for the entirety of it's 2-3 month run. It is not unheard of for extra shows to be added. 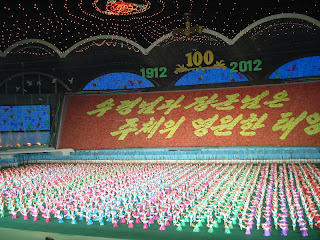 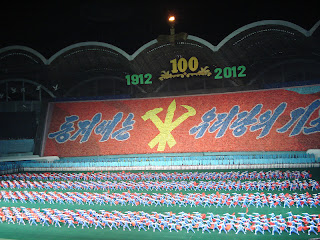 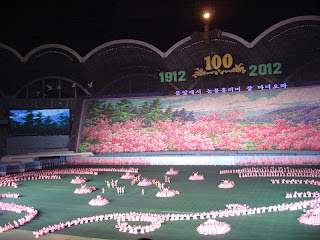 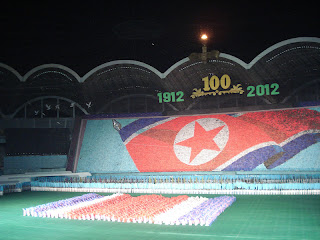 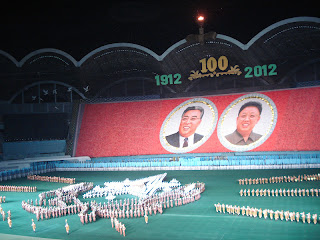 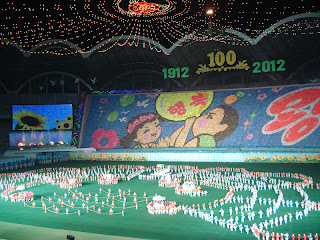 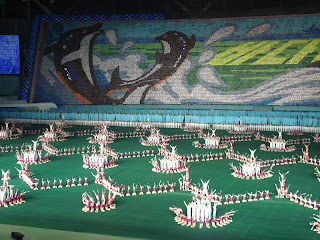 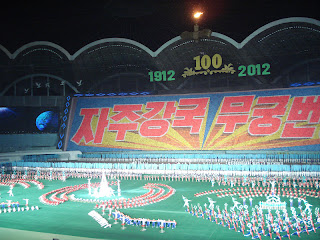 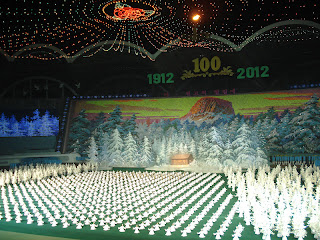