As many of you know, I was given the amazing opportunity to experience Taiwan - and I don't think I will ever forget the deliciousness of the food, warmheartedness of the people, beauty and diversity of the Island or the many friends, both local and non, that I made while there. 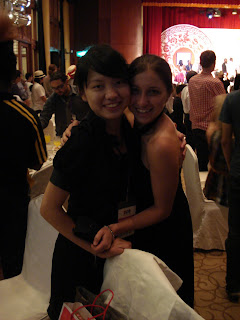 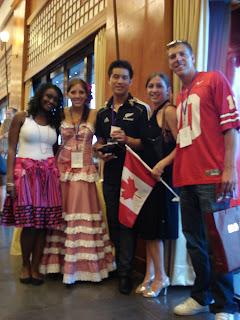 I just wanted to say Xie Xie to all of you who made it my experience so special - in particular to Alice for organizing everything and to Cathy, David and all of their family for welcoming me so wholeheartedly and doing everything in their power to make sure I both felt welcomed and got to experience all sorts of new tastes, sensations and adventures! 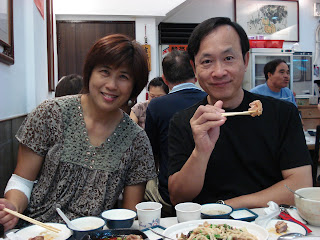 To say that Taiwan is an amazing country filled with stunning land- and city-scapes, some of the most friendly people in existence (particularly toward foreigners, though I never saw anyone act in a way that was anything but unfailingly polite even under the most difficult circumstances!) or the yummiest food (particularly the seafood! Mmmm) is a great understatement. To say that such statements begin to describe what it's like is much much closer to the truth.

I'm sure many people are wondering what exactly I  was doing in Taiwan. Well, as part of the centennial celebrations of the Republic of China (Taiwan), the Taiwanese government decided to invite roughly 250 individuals from 135 different countries around the world to come visit and blog, tweet or otherwise document their experiences while there. In an effort to get the widest coverage possible, the government stationed us with host families across Taiwan, many of whom opened their houses and heart not only to their assigned guests, but any others visiting the area as well! I have no idea how they had the strength to do it, but many, such as my host family, also tried to make sure that we experienced as much of Taiwanese life and saw as much of the island as possible. In short, they were phenomenal!


In addition to staying the two weeks with Cathy & David (my host mother and father), the government arranged for all of the guests and many of the hosts to visit Kinmen (pronounced Ji-men), in order to attend the peace day ceremonies. Kinmen is the island just off the cost of mainland China that played a crucial role in maintaining Taiwan's independence during the latter half of the 20th century.  The trip was certainly interesting and the peace ceremonies very well presented. Although many of us met properly in-person (as opposed to on facebook) for the first time on the flights to Kinmen or at the press conference the next day in Taipei, this did nothing to diminish the bond forged by sharing our experiences of Taiwan and it was difficult to part not only from our host families after the farewell banquet, but many of the other guests and their hosts as well.


Fortunately, as I had time and inclination, I was able to stick around and re-visit many of the hosts and other guests who stayed on as I explored parts of Taiwan that I had not yet managed to visit. All I have to say is that the east coast is stunning and that everyone who has the chance should definitely check it out!


For more photos and detailed day by day updates, check out:

The official SayTaiwan page is here: SayTaiwan Centennial Homestay (Guests are listed by home country and Hosts by Taiwanese locales.)


You can also check out previous posts on this blog for some pictures of delicious (though possibly frightening) Taiwanese food as well as the landscape around Taipei.